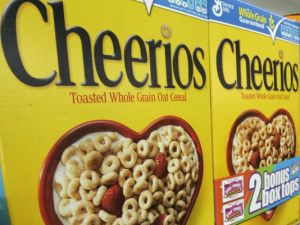 Under pressure from consumers and activist groups, General Mills says it will stop using genetically modified ingredients to make its original Cheerios cereal.

While the oats used to make Cheerios have never contained any genetically modified organisms (GMOs), the company did make changes to its sourcing — and now, for example, only uses non-GMO pure cane sugar instead of beet sugar, says spokesman Mike Siemienas.

The change was made “many weeks” ago, says Siemienas, who declined to be more specific on the timing. “We do value our Cheerios fans and we do listen to their thoughts and suggestions,” he says, in an e-mail.

Some consumers have health and environmental concerns over the use of GMOs, though there is little scientific proof that products made with GMOs are less safe. The move is being hailed by anti-GMO activist groups as a major victory. It comes at a time activists have been increasingly pressuring American food makers to remove GMOs from all foods — or, at the very least, label all foods that do contain GMOs.

Last year, Whole Foods became the first national grocery chain to require all of its suppliers to label all products that contain GMOs by 2018. In the past year, Chipotle announced plans to phase out GMOs and Kashi is also is taking action to phase out GMOs.

But General Mills has no plans to phase out GMOs from its other cereals in the U.S, even though most Cheerios varieties sold in Europe are made without GMOs. “For our other (non-organic) cereals, the widespread use of GM seed in crops such as corn, soy, or beet sugar would make reliably moving to non-GM ingredients difficult, if not impossible,” says the company, in a statement.

Even then, the latest action by Cheerios maker General Mills could nudge other big food makers to follow.

“This is a big deal,” says Todd Larsen, corporate responsibility director at Green America, a green economy activist group. “Cheerios is an iconic brand and one of the leading breakfast cereals in the U.S.” What’s more, he adds, “We don’t know of any other example of such a major brand of packaged food, eaten by so many Americans, going from being GMO to non-GMO. ”

One year ago, the group used social media efforts to rally consumers to pressure General Mills to make Cheerios without GMOs. Cheerios was picked, in part, because it’s one of the first foods given to many toddlers.

As for the taste of Cheerios, well, that won’t change, says Siemienas. “Cheerios remains the same great-tasting, wholesomely good cereal that’s been a family favorite for years.”